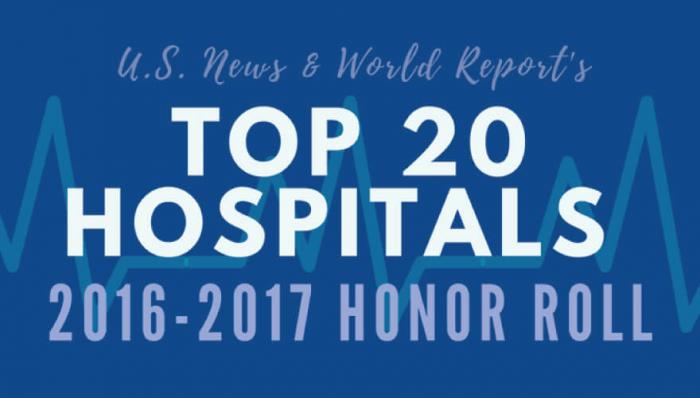 In August 2016, U.S. News and World Report announced their findings for the top 20, “Honor Roll” hospitals in the United States. These rankings, which have been collected annually since 1990, signify the best hospitals for quality and performance, from complex situations to common surgeries and care of all kinds.

Each year, these lists not only help patients find quality centers for their inpatient care needs, but they help physicians, nurses, healthcare administration, and healthcare support staff find hospital jobs that meet and exceed their own expectations for performance and patient care.

To earn a coveted spot on the 2018-2019 Honor Roll, eligible hospitals were ranked and given points based on if and how well they ranked in a specific set of 16 specialities, as well as how many “high performing” ratings they received in common hospital procedures and conditions. The top 20 hospitals with the greatest combined total, made the following list and scored the following points:

Ranking and scoring the honor roll list involves looking into the U.S. News and World Report’s 16 Best Hospital Rankings by Specialty, as well as their Best Hospitals Procedures and Conditions Rating. Acquiring a top-ranking honor roll designation is determined by the combined efforts of these two lists, as well as eligibility and various other factors.

To earn a spot as one of the best hospitals for a specific specialty, measurable data and/or the hospital’s reputation — in 16 speciality care areas — are reviewed to form the short-list of hospitals that excel in treating complex medical cases and emergencies.

The results are based mostly on objective data, including patient death rates in especially challenging cases, patient safety, and other areas of measurable data. Results are also scored and based on the three most recent year's worth of physician-supplied surveys on reputation, in which physicians vote for the hospitals that they believe to be the best in their specialty for difficult cases.

The hospital’s reputation for specialties is not a part of this study (as in the previous list), and results produced are considered ratings (not numerical rankings), where individual hospitals are rated as high, average, or below average for performance surrounding each procedure or condition.

To compete for a spot on the Honor Roll, hospitals were given points for ranking in the specialty-driven list, as well as if they rated as high performing in any of the nine procedures and conditions. Hospitals with the most points — and within the top 20 — found themselves on the Honor Roll. Points were awarded as follows:

#21 through #50-ranked hospitals all received 5 points.

All 50 hospitals received points, but no hospitals earned the #1 position for all 12 specialties — if they had, they would have received 300 points.

#10 through all ranked hospitals received 1 point.

No hospitals earned the #1 position for all 4 reputation-based specialties, but if they had, they would have received 40 points.

The 9 Best Hospitals Procedures and Conditions:

The 2018-2019 Honor Roll is composed of the top 20 hospitals that earned the most points from these lists, evaluations, surveys, and more. 448 total points were possible.

To learn more about the individual hospitals that earned the top ten spots on the list, including what specialities they rank for, where they rank for those individual specialties, and more, check out our blog: Top 10 Hospitals in the U.S. Finally, keep in mind that the Honor Roll’s focus on quality care is evolving. Be sure to check back annually for the most up-to-date studies on the best hospitals in the United States.